What Does Justice Ginsberg’s Death Mean for Reproductive Rights in Arkansas? 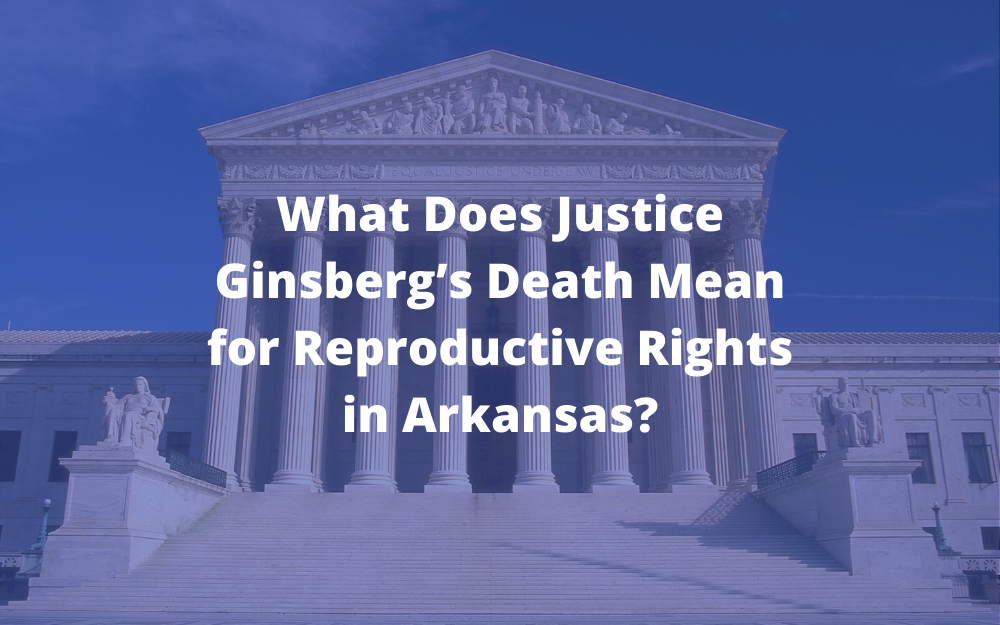 Justice Ginsberg’s death on September 18 created a vacancy on the U.S. Supreme Court that likely will have an enduring impact on women’s right to obtain abortions legally and has created an imperative that we elect more progressives to office.

Ginsberg’s death reduced the number of liberal justices to just three—Justices Sotomayor, Kagan, and Breyer. The remaining justices—Chief Justice Roberts and Justices Alito, Thomas, Gorsuch, and Kavanaugh—are reliably conservative votes on cases involving social and religious issues, with an occasional exception*. If, as expected, President Trump nominates and the Senate confirms another social and religious conservative justice, the imbalance of power will grow to six versus three. In that case, an occasional crossover vote by Roberts or Gorsuch will not affect what decisions are handed down by the Court.

With regard to abortion, in the best-case scenario, future decisions of the Court will merely severely restrict it; in the worst-case (but not unlikely) scenario, Roe v. Wade will be overturned. Access to contraceptive care will also be limited, as employers with religious or moral objections to providing coverage for the cost of contraceptives will be exempted from providing them to their employees. This has already happened to a certain extent with recent Supreme Court rulings**. There could be additional exemptions to requirements to provide contraceptive care to women by healthcare providers to come.

Depending on what state you live in, your ability to obtain an abortion will vary. Not surprisingly, blue states have few restrictions while red states have an inordinate number of them. Arkansas is one of those states whose legislators fall all over themselves thinking up laws to make obtaining an abortion ever more onerous.  While it’s difficult to imagine there could be even more restrictions imposed, with the new composition of the Supreme Court, Arkansas’s Republican supermajority will be emboldened to do so. It will even perhaps reenact some laws that were previously struck down by the “old” Supreme Court, believing that the “new” Court will be more sympathetic to making an abortion more and more impossible to obtain.

Ultimately, if Roe v. Wade is overturned, abortion will be outlawed in Arkansas.  There already is a state statute doing so that is worded to go into effect if and when Roe v. Wade is abrogated***. If that happens, any woman wanting an abortion will have to go out of state to a blue state or obtain one illegally here.

If abortion becomes illegal in Arkansas, abortions will not cease. Women will resort to illegal “back-alley” abortions, just as we did pre-Roe v. Wade, or elect to buy pills via the internet and miscarry at home. Medication is effective early in pregnancy but less so after 10 or so weeks. Clinics in Arkansas offering medication abortions do not do so after 10 weeks. Moreover, Arkansas legislators will probably move to make buying abortion pills without a prescription illegal and, of course, make writing a prescription for an abortion pill illegal as well.

This dire state of affairs means now more than ever it is important to elect progressive women (and men) to the Arkansas General Assembly. Break the Republican supermajority. It will make it more difficult for Republicans to take our reproductive freedoms away. Vote November 3.

* In June Medical Services v. Russo, Nos. 18-1323, 18-1460 (S. Ct. June 29, 2020), Roberts sided with the liberal justices to strike down a Louisiana law requiring physicians providing abortions to have hospital admitting privileges.  In doing so, however, Roberts stated that he was only doing so because there was recent precedent from an identical case; he made it clear that he did not agree with the ruling in the prior case.

***Arkansas Human Life Protection Act, Ark. Code Ann. §5-61-301 et seq. (a) The General Assembly finds that: (1) It is time for the United States Supreme Court to redress and correct the grave injustice and the crime against humanity which is being perpetuated by their decisions in Roe v. Wade, Doe v. Bolton, and Planned Parenthood v. Casey.

You have Successfully Subscribed!

Want to do more? Become a Glassbreaker! Donate monthly to help elect progressive women in Arkansas and break some effin' glass!