The Fight for LRSD: People vs. Profit 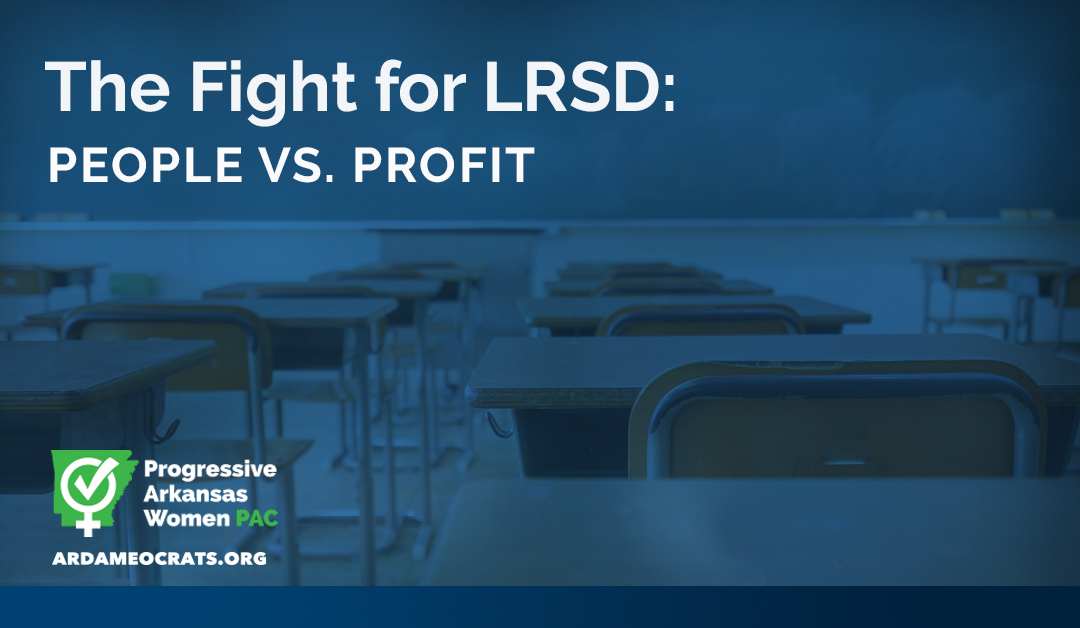 It’s about the MONEY.

If the rest of the state didn’t know before, it does now: the Little Rock School District (LRSD) is a mess. Articles abound about what is going to happen to the LRSD printed in progressive and conservative periodicals both in and out of state. Advocates for the return of local control argue the State Board of Education is attempting to re-segregate the LRSD. The State Board, made up almost entirely of Hutchison appointees, argues that they are required by law to make sure all schools in the state are equal, and they have to look out for the best interest of the students.

There is some truth to both sides. It IS the State Board’s job to ensure a quality education for all students in Arkansas. I’m not sure what they’ve been doing the last five years, but for the LRSD, it hasn’t been that.

The Board’s hairbrained scheme to return non-failing schools to local control while placing failing schools under “different” control did essentially separate the district along racial lines. The new plan is just lipstick on a pig. There will be a school board elected for the LRSD that has no power, and the Board will just keep doing what it has been doing all along, allowing charter schools to flood the market.

It’s not about school choice or doing what’s best for the students. If it were, then this would not be happening. Studies have shown that school choice, at least by the time a child reaches high school, doesn’t matter. A study of the Chicago Public School System’s randomized high school lottery revealed that students who went to “better” schools had the same standardized test scores, attendance rates, course-taking, and credit accumulation as their counterparts that were left behind at the “bad” schools.

No question, there is test score gap, and that gap starts early on. If this were really about doing what was best for the students, we would have universal pre-K. Baseline Elementary would have the same facilities and resources as Don Roberts Elementary. The State Board would have been working to improve the schools since taking over the district in 2015 instead of showing up six months before the deadline to reconstitute the district. Diane Zook stated that leaving the State Board in control of the failing schools would give them more flexibility to offer resources and support for those schools. When I asked her why none of that had been done the last five years, this was her reply: 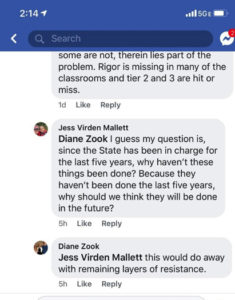 The split district plan was just a way to ensure continued support for charter schools and the Waltons in Little Rock. I don’t think anyone on the State Board said, Hhey, let’s keep the black schools under state control and return the white schools to local control.” I chalk it up to ignorance and blindness to systemic racism. Problematic? Of course. A conscious decision? I don’t think so. It was never intentionally about racism.

It is and has always been about the money. The Walton Foundation is the biggest backer of charter schools in the country, and the Waltons don’t do anything that isn’t profitable. Charter schools allow them to put taxpayer dollars into their pockets while appearing to care. Asa’s Board of Education appointees look like a “who’s who” of dismantling public schools:

When the State Board realized how bad the split district plan looked, they came up with a new plan that would allow them to keep control of the entire district and continue to support the Walton money behind the charter schools. The new plan is ridiculous. In three single-spaced pages of the Memorandum of Understanding for the new plan, the elected school board has four duties and all of their decisions on those four limited issues can be appealed to Johnny Key, Commissioner of the State Board of Education and another huge fan of charter schools. Never once does it say that the LRSD will be returned to local control, and the State Board gets to decide if the exit criteria it sets has been met. It’s clear that the State Board doesn’t think the LRSD will ever meet the exit criteria. And why would they allow them to? It’s too profitable not to.

For anyone interested, here is a link to the MOU:

Ms. Virden Mallett is a member of the Arkansas Trial Lawyers Association, the American Association for Justice, and the Arkansas and Pulaski County Bar Associations. She has received awards for Top Ten Attorneys in Client Satisfaction and is recognized as a National Lawyer of Distinction.

In 2018 Jess ran for Arkansas House of Representatives for District 32. She is married to Trey Mallett and they have a daughter named Anna.